I
had the opportunity to dine with two Peppercom alumni last night. I hadn't seen
one for several years and the other for at least a decade. 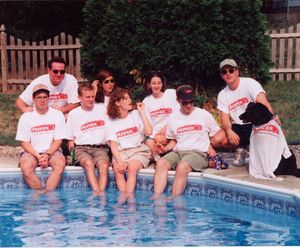 Talk
naturally turned to the good, old days and some of the crazy dotcom clients
from with whom we'd worked. To wit:

–
The group of Israelis who, until they leased their own Manhattan office space,
walked up and down our hallways day after day screaming in Yiddish into their
cell phones.

–
The 23-year-old PR director of another dotcom who, in our brief kick-off
meeting, dropped more F-bombs than the entire cast of Goodfellas did in their
two-hour plus movie. This ill-mannered young lady later went on to be named a
PR Week Young PR Professional of the Year. Talk about a f**king injustice.

–
The dotcom CEO who, on the day of his firm's IPO, went ballistic on our hapless
account supervisor for some slight transgression. The latter now practices law.

–
The 'me-too' dotcom company who aspired to be seen as nothing more than another
Scient or Sapient so they could make the same kind of killing when they did
their IPO. We ended up suing them for unpaid fees after they went belly-up.

–
The brand-new dotcom client I confronted after learning from a Peppercom job
prospect that her agency was actively pitching the account. We fired the client
on the spot. That was fun.

–
The dotcom client that hired us in the morning and, after learning their
funding hadn't come through, fired us the very same afternoon. They still hold
the record for shortest client relationship ever.

And
then, the talk turned to the employees. Because we were growing at an annual
clip of 75 percent, we hired anyone who could walk and chew gum at the same
time. So, we had:

– The employee who, one month after joining us, strolled
into my office, sat down, folded his arms behind his head and sighed, "You
do know I'm working on two of the hottest btob tech accounts in the nation
right now, correct?" I nodded my head. "Well," he continued.
"I want a raise and promotion now." Let's just say he moved on to
another agency shortly after that conversation.

–
One employee who got in a heated argument with a client, telling the latter he
had no clue what public relations was all about and singlehandedly killed the
relationship.

–
Another employee who, on his first day of work, simply disappeared after lunch.
We sent out a search party around 4pm and found him chatting amiably with a
friend at a nearby Starbucks. He didn't think there were time limits to lunch
periods.

–
The two employees who, anticipating today's vitriolic Fox vs. MSNBC shout
downs, would scream at one another on subjects ranging from gender and race to
dress code and education. That sure made for a great workplace culture.

Ah,
those were the days. Today seems so pale by comparison. How about you? Any
memorable dotcom tales you'd like to share?