When asked, most humans will admit to being more scared of public speaking than dying. (According to a study conducted by National Public Radio, 43% of Americans say their greatest fear in life is public speaking.  In fact people who responded to the survey said they fear public speaking more than death. ) 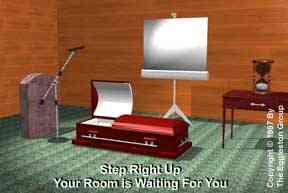 It's the fear of the unknown that scares most of us, and the anticipation of speaking in front of a group triggers our age-old fight or flight response (a fact I think the Buddhist expression in the headline captures beautifully).

I saw this very basic human emotion demonstrated yet again Monday night when I led a 'Humor in the Workplace' seminar at the Stern College for Women at Yeshiva University. At first, the 17 students were petrified to hear that, after some coaching, they'd be expected to stand in front of the class and 'be funny.' But, each did. And, each student was, in fact, funny.

Recognizing that overcoming the fear of public speaking is a key component in our employees' professional development, we've incorporated stand-up comedy workshops in our training and have seen remarkable results. In addition to making our employees feel more secure about addressing a large group, stand-up comedy training has produced a host of intangible side benefits: enhanced morale, team building and a subtle, but very real reinforcement of our workplace culture: We take our work seriously, but we don't take ourselves seriously at all.

I'm amazed that more organizations haven't embraced humor as a recruiting and retention tool. With the economy improving and headhunters once again cold-calling employees with offers, one would think more firms would wake up to the importance of humor to culture (and, in turn, the importance of an open and fun environment in recruiting talent). Yet, as this PR Week feature indicates, most firms are, instead, relying on technology, contests and other gimmicky tactics to woo talent.

I'm not suggesting that humor in the workplace is a be-all and end-all. Money matters. So do perks and an opportunity to work in many different areas of an organization.

But, with everything else being equal, employees will choose a warm and engaging employer. Why? Because people want to work with other people who make them laugh.

So here's a note to all the headhunters and in-house recruiters at the large organizations: think about incorporating humor workshops alongside matching 401k programs, massages, meditation rooms, contests, Twitter feeds and other ploys. Every human being needs help dealing with the tiger of the mind. And, every organization can play a role in helping employees tame the beast. Those that do will find themselves further up the food chain in the never-ending quest to be king of the workplace jungle.