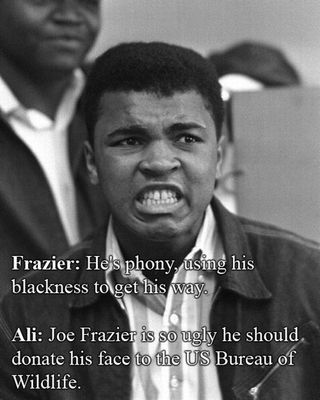 I was saddened to read of the untimely passing of former heavyweight champion Smokin' Joe Frazier.

While I've always adored Frazier's uber nemesis, Muhammad Ali, I also respected Joe. But, while Joe was superbly matched with Ali in the ring, he was hopelessly outclassed by the Louisville Lip in the media world.

I believe there are several lessons every PR professional can learn from Smokin' Joe's mismanagement of the media:

1.) Create a positioning and three key message points and stick to them in each and every interview.

Ali constantly called himself The Greatest and said he was the “smartest, fastest and prettiest heavyweight champion of all time.” A top Edelman media trainer couldn't do better than that.

Joe, on the other hand, said he “…preferred to let his fists do the talking.”

Round one to Ali.

2.) Have a crisis plan in place. Ali constantly belittled Joe, calling him an Oreo cookie, gorilla and Uncle Tom among other things. Joe grimaced, but never responded in kind. Hence, the media and public tended to believe what The Greatest said.

Round two to Ali.

3.) Line up third party ambassadors. I was never quite sure if Howard Cosell made Muhammad Ali, or vice versa. In the final analysis, it doesn't matter because whenever Ali needed an erudite, verbose and outspoken supporter, Cosell had his back. Frazier, on the other hand, never developed a relationship with a reporter who could have advocated on Joe's behalf.

Round three to Ali.

4.) Make nice with the city fathers. Try touring Muhammad Ali's hometown of Louisville and not running into a reminder of The Greatest. Now, try doing the same thing in Joe's hometown of Philadelphia. There's no Joe Frazier Boulevard. No Joe Frazier Hall of Fame. Nothing. In fact, in what may be the ultimate insult, the only statue of a boxer in the City of Brotherly Love celebrates the fictitious Rocky Balboa.

Ali was a savvy marketer from the get go. As a result, Louisville is to Ali as Liverpool is to the Beatles. And, poor Joe is just another forgotten Philly boxer.

Round four to Ali.

4.) Take the high road. Most Americans don't know that Ali savaged Frazier outside the ring, calling him every negative name under the sun. As noted previously, Joe wouldn't (or didn't know how to) respond. But, when Ali was diagnosed with Parkinson's disease, Smokin' Joe had a huge image and reputation opportunity. If he had swallowed his pride and reached out to a very ill Ali to say that all was forgiven and forgotten, Joe quite possibly could have re-shaped his legacy. Instead, he stewed in silence and refused to say or do anything.

Fifth and final round to the winner and STILL heavyweight PR champion of all time: Muhammad Ali!

Post script: I actually met Joe Frazier about 15 years ago. His band, Smokin' Joe and the Kittens were playing some dump off the strip in Atlantic City. I spotted him before the show and went right up to introduce myself. He couldn't have been nicer and answered every one of my questions, including those about:

1.) Ali: 'He was maybe the fifth or sixth hardest puncher I ever fought. Chuvalo. Foreman. Bonavena. Those guys were the real punchers."

2.) March 8, 1971: (the night he beat Ali to become heavyweight champion):  “They've taken everything else away, but no one can take that away from me.”

3.) His fabled left hook: “I had a good hook, but this was much bigger and tougher than my hook,” said Joe, pointing to his heart.

If only Joe had shared pearls like that in his prime, things might have turned out differently. Instead, I remember Smokin' Joe Frazier as a great heavyweight in the ring and a true P.R. flyweight outside it.