Today’s guest post is by Peppercomm’s Director, Media and Editorial Strategy, Matt Purdue who, I’m pleased to report, does know sh*t from shinola.

What happens when your company’s most important brand messages don’t match with the experience you offer your target customers? You end up with disappointed and frustrated prospects, that’s what.

Case in point: I’m a bit of a watch nerd. I see a watch as more than a timekeeper. I see it as an accoutrement (five points for using that word) that makes a statement about the guy who’s wearing it. That’s why I was so excited when a company called Shinola recently came on the scene.  I won’t bore you with their background – you can Google it. But, in a nutshell, Shinola makes sharp-looking watches that are hand-assembled right here in the U.S. of A. – in Detroit of all places.

On June 6, I received the email below from Shinola. After quickly selling out their first run, Shinola was offering a second run…a “second chapter,” as they cleverly wrote.  The watches were purportedly rolling off the assembly line. And if I reserved by June 12, I was guaranteed to have a watch in time for a Father’s Day gift to myself. 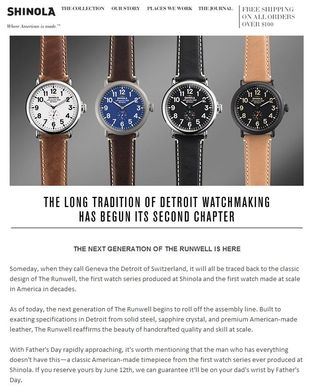 About three hours after I received the email, I clicked over to Shinola’s website. Every single watch was sold out. Confused, I called Shinola. A very pleasant woman answered the phone. She confirmed that, yes indeed, the watches sold out within two hours. As my colleague Sam Ford so astutely put it: “That was a really short second chapter.”

I read the company’s email messaging back to her. I told her that images of watches rolling off an assembly line didn’t match the reality: that Shinola made so few watches that they were gone in two hours. I asked her why Shinola would promise Father’s Day delivery for all orders placed by June 12, when they must have had a sense that there’d be no watches remaining on June 12.

She apologized profusely, but didn’t have any satisfactory answers as to why Shinola implied they were making watches galore, when they obviously assembled a relatively small batch. I suggested to the woman that all Shinola had to do was simply tell the truth: that the first batch sold out quickly, so customers had better act fast to avoid being disappointed. We went on to have a long discussion about other alternatives: for example, hold five daily flash sales, selling 20% of the batch each day until they are all sold, etc., etc. But, in the end, it was all talk.

In fact, as I write this, Shinola is still running ads with this messaging: “Your dad can't pass down his American-made wristwatch if you never buy it for him. Father's Day collection from Shinola.” Well, sorry, dads. You’ll just have to wait for the next batch…because there aren’t any watches left. Maybe you’ll have one for Labor Day?

Every executive today is busier than ever, and doesn’t need any more headaches. So why do companies inflict this pain on themselves? When it comes to customer messaging, you should not have these problems. The best customer messaging aligns the brand promise with the customer experience. When it comes to writing and distributing your brand messages, there’s simply no excuse for overpromising and underdelivering.